A quick reminder ... all of my calls are available in different exotic wood species. Just drop me a line with your order to have your call customized. 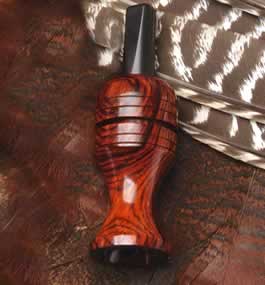 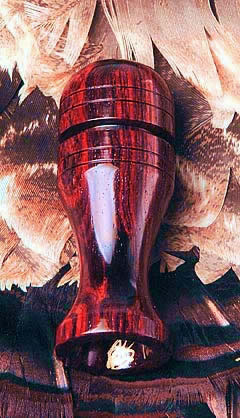 T
his hand-turned Wood Duck call is usually made of Cocobolo, unless you specify something else. The Cocobolo will handle getting wet better than other other wood species. It's not a submarine, but it'll withstand being pretty wet. It's sealed inside and out. It's also hand signed, dated and numbered. 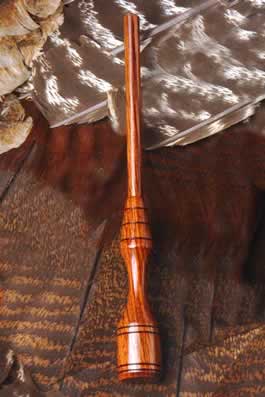 T
his one-piece hand-turned striker is made from Honduran Rosewood. It's finished with a clear-coat finish. These strikers are also available in Purpleheart, Cocobolo, Osage Orange and other fine woods.

The olive colored one is the stiffest resistance, for hunters who use a high volume of air

The green call is the lightest resistance, and is usually used in low volume situations.

The other three calls fall in the middle of the two extremes. 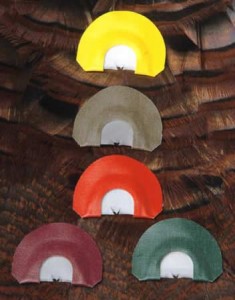 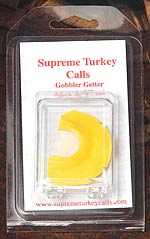 T
he yellow diaphragm call is the Gobbler Getter. It is three-and-a-half reed (V)cut of .003 latex thick. 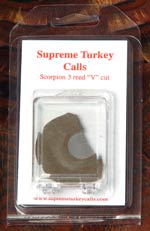 T
he olive colored call is called the Scorpion. It's a three-reed (V)cut of .004 latex. 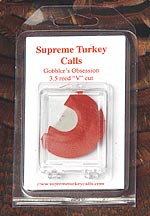 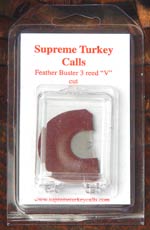 T
he maroon diaphragm call is the Feather Buster. It is a three-reed (V)cut prophylactic and latex material. 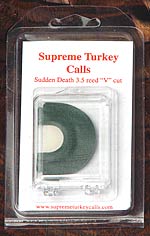 T
he green call is the Sudden Death call. It is three-and-a-half (V)cut made of prophylactic material.

I appreciate feedback on my calls and all the turkeys that are gotten with my calls. Drop me a note anytime!